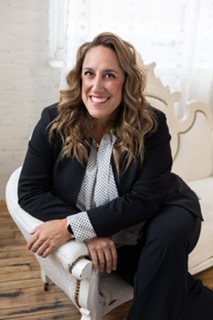 “We are very excited to have one of our own GRPS graduates at the helm of the GRPS Foundation,” said Dr. Leadriane Roby, Superintendent of Grand Rapids Public Schools. “Stephanie brings a whole new level of energy, excitement, experience, and relevant personal connection to our schools that is going to take the GRPS Foundation to the next level for the betterment of our scholars.”

As leader of GRPSF, Adams will be responsible for directing the work of the organization to achieve its mission of “ensuring that all Grand Rapids Public Schools students have the tools they need to learn, grow and thrive.” As well, she will have overall strategic and operational responsibility for fundraising, staffing, programs, and administrative affairs. She will report directly to the GRPSF board of directors.

“I am absolutely thrilled to be accepting this opportunity to lead the organization. As an alum of Ottawa Hills, a Latina, an active member of the GR community, there is no greater pride than being able to raise money for our schools,” said Stephanie Adams.

At Friends of Grand Rapids Parks, Adams focused on collaborating with a team to empower people to cultivate vibrant parks, green spaces, and trees in the Grand Rapids community. An avid outdoor enthusiast and lover of nature, Adams put in place a new strategic plan, tripled the fundraising efforts, increased volunteer hours from 1,200 hours to over 3,000 hours a year, and grew the staff by over double in 5 years.

Adams has a lengthy career in the nonprofit sector that include past positions in marketing and communications at the Dorothy A. Johnson Center for Philanthropy at Grand Valley State University and The Salvation Army Kroc Center in Grand Rapids, MI. She was also the associate director for West Michigan Center for Arts & Technology, marketing director for Goodwill Industries of Greater Grand Rapids and senior corporate sales executive for the Grand Rapids Griffins AHL Hockey Team.

It was Adams’ demonstrated passion of working with a team to be catalysts in engaging community members and convening leaders to come around a common mission and goal that stood out to the selection committee.

“I know that I speak for the entire GRPS Foundation board when I say how thrilled we are to have Stephanie Adams joining the team,” said Madelaine Lane, GRPSF board president and attorney at Warner, Norcross & Judd. “Not only is Stephanie a proven advocate for the Grand Rapids community, but she also is a GRPS alum. As such, she knows firsthand how important the foundation’s mission is to help provide equitable resources for our next generation of community leaders—the students of GRPS.”

Established as an independent nonprofit organization in 1993, the foundation started as a vehicle for private funding to support athletics. Today, the foundation has grown to support programs and projects that affect every aspect of a student’s education thanks to a team of 23 volunteer directors, three ex-officio board members, staff members, and numerous volunteers. It links community resources with the needs of GRPS for the benefit of its students and learning environment, not just by raising money, but also by identifying and strengthening partnerships and opportunities to engage the community in its efforts. The foundation believes that all students deserve every opportunity to gain experience, grow and thrive. Since 2003 the foundation has granted more than $20 million through its fundraising efforts.

“I am really looking forward to a GRPS alumna being President and CEO of the GRPS Foundation,” adds Kimberley Williams, Vice President of the Grand Rapids Board of Education and Board Designee to the GRPS Foundation. “Stephanie’s leadership will be an inspiration to all GRPS scholars.”