Like the neighborhoods they serve, like the children they graduate, schools evolve over time. This is especially true of Huff School, a welcoming place that went through numerous changes in its long history.

GRAND RAPIDS, Mich. (GRPS) — Like the neighborhoods they serve, like the children they graduate, schools evolve over time. This is especially true of Huff Elementary School, a welcoming place that went through numerous changes in its long history.

Shown here in this late 19th century photograph, Huff Elementary was located on Knapp Street west of what is now Fuller Avenue across from an acreage of land that later became Fairplains Cemetery. 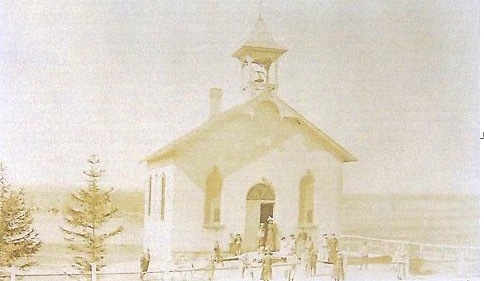 Originally known as Knapp School, Huff Elementary was renamed after the turn of the century in honor of a local civic leader. The name change was not all the little school experienced. In the early 20th century, between 1910-1915 the school got a facelift—a new roof, a second door and some cool shade from several new trees.

The school burned in 1933 and a new Huff Elementary was built in 1934 by the Civil Works Administration (CWA) and Federal Emergency Relief Administration (FERA). The school also had a new address—it was now farther north on the east side of Ball Street just south of Aberdeen.

Except for its students, it led a lonely existence in the neighborhood for a few years. There were few trees and no houses nearby. As the neighborhood developed the school was remodeled and expanded to make room. This included tree plantings and a playground. Along the way, Huff Park came into existence across the street from the school, complete with a picnic area and softball fields. A little farther west the wetlands area was developed, eventually becoming a nature sanctuary.

The area around the school featured numerous building projects, but many were for older, empty-nest families or for young professionals and college students. The school no longer had enough children to fill its classrooms and was closed in 2001. The building still stands and most recently became home for the City of Pentecost faith community.